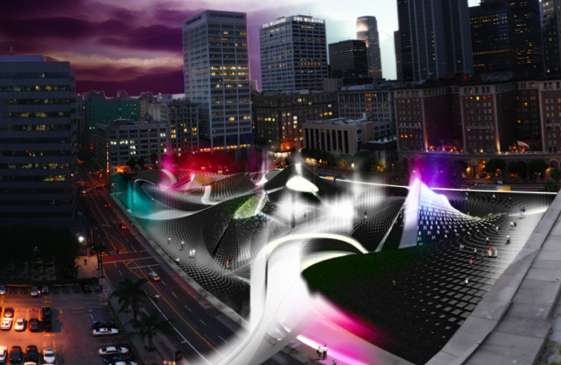 Amelia Roblin — August 7, 2012 — Art & Design
References: behance.net & suckerpunchdaily
Urban Amphetamine may look like a futuristic metropolitan haven with its colorful electric glow and its complex computer-generated forms. Interestingly, the values at play within the heart of the building are somewhat in conflict with the digital culture that it might outwardly attract.

John Farrace intends this project to reconnect the cyber-obsessed with the physical world. He discusses the hyper-stimulated and hermitic behaviors of this type of person and expresses that his mode of virtual communication is merely a facade of symbols and references to the flesh-and-blood citizens around him.

Proposed for Los Angeles, California, this excitingly smooth, sinuous and undulating sculptural structure actually houses a collection of spaces that facilitate tangible social interaction. A physical self-awareness element is also integrated into Urban Amphetamine in the form of mirrored rooms and such.
3.6
Score
Popularity
Activity
Freshness