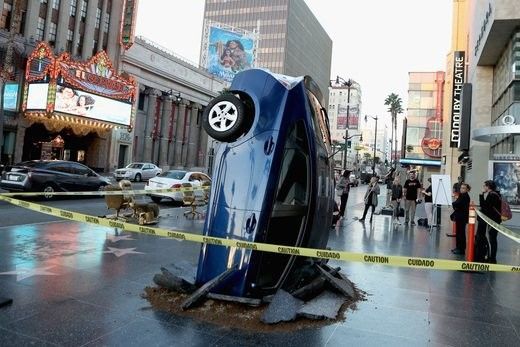 Joey Haar — November 21, 2016 — Autos
References: digitaltrends
Share on Facebook Share on Twitter Share on LinkedIn Share on Pinterest
As part of a promotional campaign for 'The Grand Tour,' a new automobile show from the same hosts who popularized 'Top Gear,' a series of upended car displays have emerged throughout the US and countries across Europe. In the typically cheeky manner of Jeremy Clarkson, James May, and Richard Hammond, the hosts of 'The Grand Tour,' the upended car displays make it look as though a Toyota Prius has driven off the edge of a building and been lodged grille-first into the ground below.

There are currently three of the impressive displays: one in Los Angeles, one in London and one in Berlin. In order to conduct the elaborate, promotional pranks, The Grand Tour hosts cut three Priuses in half, placed them on-location and masked their handy work with rubble and debris to make it look impressively authentic.
4.8
Score
Popularity
Activity
Freshness
Get the 2023 Trend Report FREE