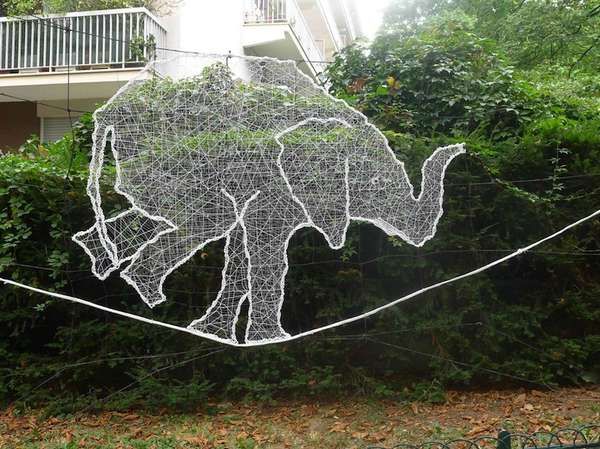 Meghan Young — October 10, 2012 — Art & Design
References: blog.anastassia-elias & mymodernmet
Share on Facebook Share on Twitter Share on LinkedIn Share on Pinterest
Tightrope by Anastassia Elias, an artist based in Paris, is a playful art installation that revolves around what many would believe is impossible--an elephant attempting to cross a tightrope. Although this may have happened in circuses of yesteryears, this modern interpretation is made all the more possible because it is captured in white thread.

Located in Colbert Square, Tightrope by Anastassia Elias is a sight to behold. As one of 54 artists asked to participate in Le Génie des Jardins, Elias created an outdoor work of art that is both unexpected and original, which were part of the criteria set out by the curators. Measuring 200 by 150 centimeters, the chaotically strung installation was put on display until September 30, 2012.
4.6
Score
Popularity
Activity
Freshness
Get Trend Hunter Dashboard