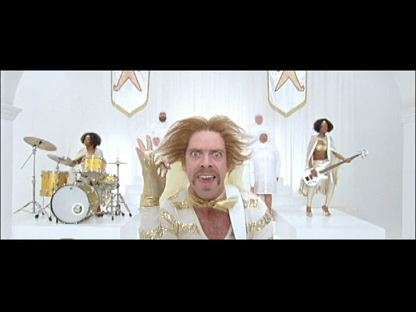 Got Milk? Goes for (White) Gold

Ed White — April 2, 2008 — Unique
References: youtube
Share on Facebook Share on Twitter Share on LinkedIn Share on Pinterest
Spare a thought for plain old milk. When you're competing with the multi-squillion dollar budgets and cultural 'cool' clout of the razzle dazzle marketing of the likes of Coca-Cola and Pepsi, being a fuddy-duddy, unbranded, terminally uncool beverage is tough. Really tough. And marketing the stuff? Are you kidding me? But the folks over at Goodby, Silverstein and Partners in San Francisco aren't ones to go down without a fight and have been putting out trailblazing work for California Milk Board's Got Milk? campaign on modest budgets for a while. Remember the Get The Glass game from last year? You should, it's great, one of the first genuinely fun online ad games. Give it a whirl: www.gettheglass.com.

Well this time they've gone one further with White Gold, a preposterously brilliant rock star and his backing vocalists the Calcium Twins (bearing a remarkable resemblance to Oprah), who have a penchant for the white stuff. No, not that white stuff, milk. Naturally there's a ridiculous MySpace White Gold page for the rock pantheon's latest addition, a brace of ludicrously OTT White Snake 80s-styled music videos and a bunch of ads set to roll out over the coming weeks. (We'd quite like to see them tour, but sadly no dates have been announced yet, fingers crossed).

Nice to see a different approach to the dull usual (and probably ineffectual) finger pointing PSAs usually employed for this genre of advertising. Who knows, it might actually even get the little blighters kids to drink more milk, and hell, if not, it's always good for a laugh.