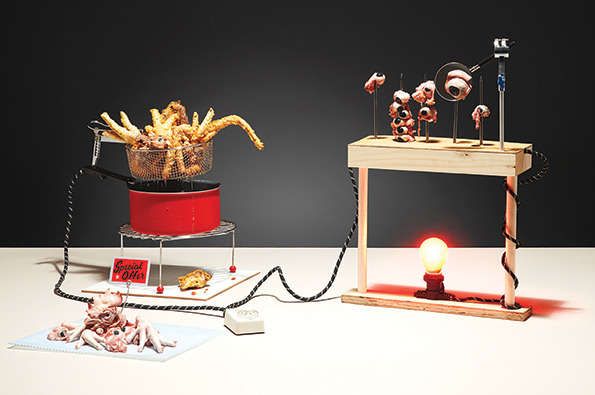 The Serpent That Ate Its Own Tail Series is Disturbingly Delicious

Meghan Young — June 4, 2013 — Lifestyle
References: catherinelosing & itsnicethat
Share on Facebook Share on Twitter Share on LinkedIn Share on Pinterest
Photographer Catherine Losing is at it again with her visually striking still life photography, this time with the series titled 'The Serpent That Ate Its Own Tail.' Shot for issue 2 of The Gourmand magazine, it is much more complicated than her previous Scrunchie series. Although just as quirky, it is not as minimalist. This is due in large part to the equipment used throughout the photoshoot.

As though one big laboratory experiment, the The Serpent That Ate Its Own Tail series appears to test the conductive abilities of various foods. With the help of food stylist Iain Graham and set designer Anna Lomax, Losing captures questionable meals. From a knife-wielding octopus to a watchful row of pierced pig’s eyeballs, the imagery is disturbing.
1.7
Score
Popularity
Activity
Freshness
Get the 2023 Trend Report FREE

Ironic Swimwear Themes
The Project 104 'My Body, My Shrine' Collection is Glamourously Sinful