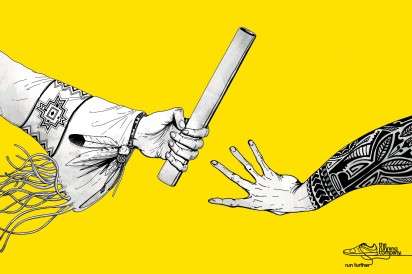 The Running Company Campaign is Colorful and Positive

Meghan Young — August 9, 2012 — Fashion
References: ogilvy & ibelieveinadv
The Running Company campaign sends a couple of great messages. First of all, as the caption states, it encourages people to "run further." It inspires individuals to do that by showing runners of different ethnicities participating in a relay, effectively showing how far they actually ran. The second message is closely linked to the eclectic ethnicities portrayed in The Running Company campaign. The idea of different cultures working together is quite beautiful. It also shows that people of all walks of life could benefit from this company.

Created by Ogilvy, an ad agency based in Sydney, Australia, The Running Company campaign was art directed by Luke Chard with creative direction by Michael Raso and illustrations by Simon Gleeson.
3.3
Score
Popularity
Activity
Freshness