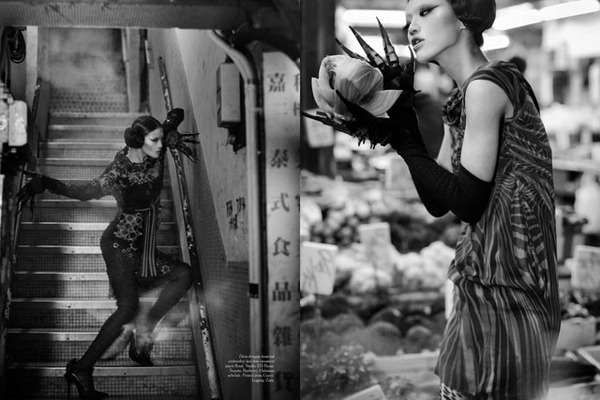 Meghan Young — August 27, 2011 — Fashion
References: nicolinepatricia & behance.net
Share on Facebook Share on Twitter Share on LinkedIn Share on Pinterest
As though inspired by the cult classic film 'Edward Scissorhands,' The Outsider photo series follows a woman marred by her mechanically clawed hands. Although a beautiful woman, it appears that no one can look past this physical eccentricity, hence the title of the photo shoot.

Shot by Jakarta-based fashion photographer Nicoline Patricia Malina, The Outsiders photo series falls in line with her other narrative-heavy spread. Although Malina often focuses on stories of love and romance, The Outsider editorial is one of rejection and loneliness. In fact, Malina's photo shoots are easily recognizable for the amount of color that saturates each frame, which embrace these happy themes. The Outsider photo series, on the other hand, is shot completely in black-and-white to illustrate quite bluntly how much it diverges from her other work.
0.7
Score
Popularity
Activity
Freshness
Get Better and Faster