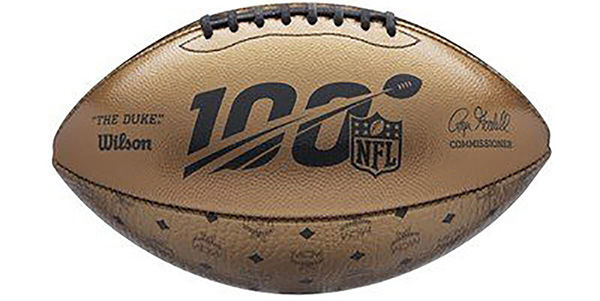 Wilson Sporting Goods and Others Created a Super Bowl Football

Daniel Johnson — June 10, 2020 — Lifestyle
References: wilson & sgbonline
Share on Facebook Share on Twitter Share on LinkedIn Share on Pinterest
Wilson Sporting Goods, along with MCM Worldwide, and the NFL, collaborated to create a Super Bowl football, which will serve as a collector's items to commemorate Super Bowl LIV. The Super Bowl football is the third product from the partnership between Wilson and MCM, which began back in 2018.

The ball features branding commemorating the 100th anniversary of professional football, as well as three panels with Wilson branding. The ball also features black laces to contrast with the gold color of the ball.

Overall, the new product could appeal to fans of the sport, or collectors looking for products to commemorate the NFL's latest season.

Amanda Lamb, the Wilson global marketing director, spoke about the product, "The result is a ball that is unlike anything football and fashion fans have seen before and that celebrates the 100th anniversary of the game in style.”