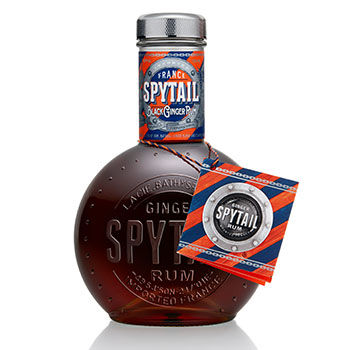 Laura McQuarrie — February 4, 2017 — Lifestyle
References: biggarandleith & thespiritsbusiness
Share on Facebook Share on Twitter Share on LinkedIn Share on Pinterest
'Spytail Black Ginger Rum' is a new creation from Biggar & Leith that has roots that date back to the 19th century. The rum recipe is based on an aged Caribbean rum that was made with fresh ginger and spices by the barrel. True to this tradition, the rum is distilled in the Caribbean before it is shipped to Cognac, France for aging, spicing and blending.

The name of the product, Spytail, is a reference to submarines, while the rotund shape of the bottle also takes cues from portholes on these vessels. Another notable detail is that the striped label for Spytail is based off of the French Naval signal flag.

On the launch of this new rum product, Elwyn Gladstone, the founder of Biggar & Leith notes: "We’re seeing that ginger is becoming a seriously popular flavour among cocktail consumers – Moscow Mules, Dark & Stormy and premium ginger beer are all booming and we think that a delicious Black Ginger Rum is going to fit right in."
1.8
Score
Popularity
Activity
Freshness
Get Trend Hunter Dashboard