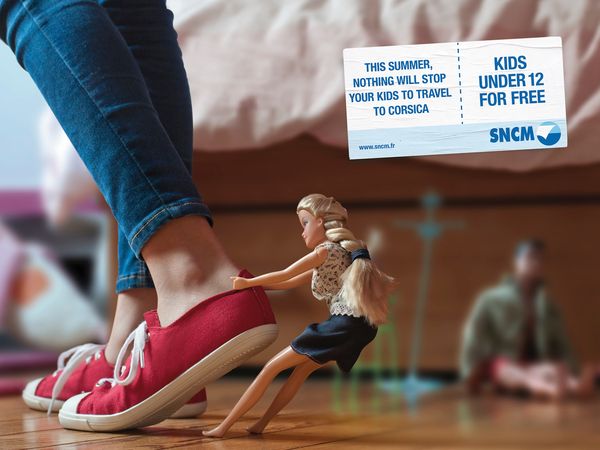 The SNCM 2014 Campaign Promote Children Under 12 Flying for Free

Meghan Young — March 18, 2014 — Marketing
References: sncm.fr & adeevee
Share on Facebook Share on Twitter Share on LinkedIn Share on Pinterest
The SNCM 2014 ad campaign really wants to grab people's attention, especially those in the advertisements themselves. That is because it is promoting a phenomenal deal that all parents should take advantage of. It reads, "This summer, nothing will stop your kids to travel to Corsica." As the toys in the SNCM 2014 ad campaign are trying to convey, children under 12 can fly for free.

Conceived and executed by Change, an ad agency based in Paris, France, the SNCM 2014 ad campaign was art directed by Stéphane Pru and Stanislas Chéné with creative direction by Arnaud Le Bacquer. Relying on playful imagination, it isn't blatant about its message, at least visually. Shot by the Los Hermanos Brothers, the images are more fun than informative.
4.1
Score
Popularity
Activity
Freshness
Get the 2021 Trend Report FREE