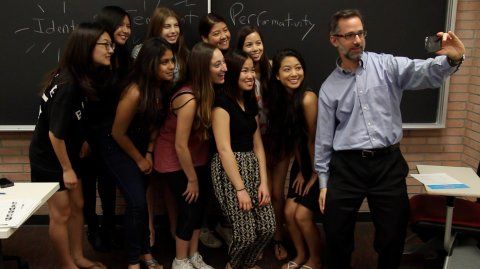 Katherine Pendrill — August 4, 2016 — Social Good
References: medium & businessinsider
Share on Facebook Share on Twitter Share on LinkedIn Share on Pinterest
Last year, the University of Southern California began offering a unique college course called '#SelfieClass,' which explores issues of identity and diversity. While selfies are often dismissed as shallow and narcissistic, professor Mark Marino sees the rise of selfies as a much more complicated phenomenon. As a result, Marino is inviting students to explore the subject in a new light.

The #SelfieClass is a writing course that tackles the complicated issues of identify and diversity within the context of selfies. Marino begins the course by inviting students to take five selfies and then write about how they perform their identity. This can include tackling subjects such as race, ethnicity, gender, sexuality and even socioeconomic status. The idea is that framing the course within the context of selfies makes it easier for young students to discuss sensitive issues.

As social media increasingly shapes the lives of students, the University of Southern California demonstrates how colleges can adapt their material to make it more relatable for a new generation.
2.7
Score
Popularity
Activity
Freshness
Get the 2021 Trend Report FREE