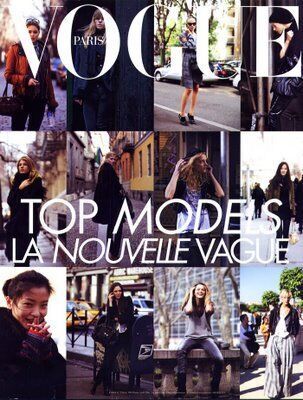 One photographer, known best as The Sartorialist, deserves the title, King of street fashion. His blog is featured on Style.com, and now Paris Vogue has opened the door that will merge high fashion with street fashion by contracting the photographer to shoot the cover as well as an inside spread.

"One of the things I like about the blog format is the sense of 'real time' that it can convey on developing stories," says Scott Schuman, the man behind the lens.

He shot the ads, which appear in the upcoming addition of Vogue Paris during the January fashion weeks which took place in NYC, Milan and Paris..

In his bio Schuman says, "I started The Sartorialist simply to share photos of people that I saw on the streets of New York that I thought looked great. When I worked in the fashion industry (15 years), I always felt that there was a disconnect between what I was selling in the showroom and what I was seeing real people (really cool people) wearing in real life."

Schuman was voted as one of Time Magazine's top 100 Design Influencers and his work is referenced in countless fashion magazine and blogs.
3.9
Score
Popularity
Activity
Freshness
Attend Future Festival