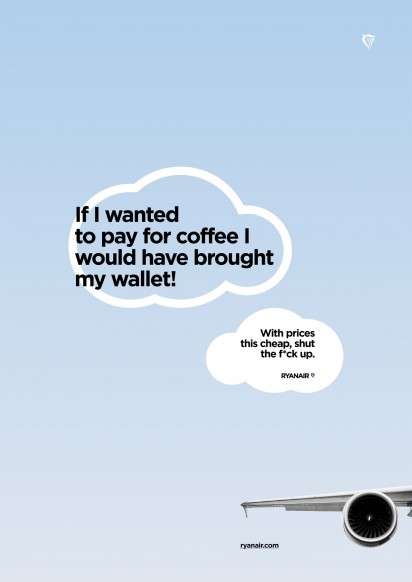 Meghan Young — January 31, 2013 — Marketing
References: miamiadschool & ibelieveinadv
Share on Facebook Share on Twitter Share on LinkedIn Share on Pinterest
The Ryanair campaign makes a bold move that is nevertheless extremely entertaining. It addresses the common complaints of its inflight services and baggage restrictions. One print ad reads, "If I wanted to pay for coffee, I would have brought my wallet," while another says, "They only let me carry on one bag. That's 5 less than I came with!" To both these complaints, the Ryanair campaign responds, "With prices this cheap, shut the f*ck up."

Created by the Miami Ad School, which is based in Berlin, Germany, the Ryanair campaign was art directed by Hugo Gstrein with rather shocking copy by Patrick Tamisiea. Despite the rude and foul language used, the Ryanair campaign does shock people into re-prioritizing their needs and wants while bringing their attention back to why they fly with Ryanair to begin with.
6.2
Score
Popularity
Activity
Freshness
Get the 2021 Trend Report FREE