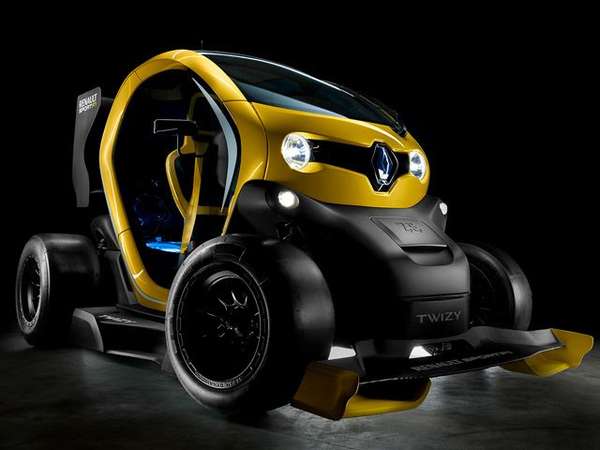 The Renault Twizy F1 is Packed with Race-Ready Technology

Michael Hines — April 26, 2013 — Autos
References: renault & carbuzz
Share on Facebook Share on Twitter Share on LinkedIn Share on Pinterest
The reality is that the Renault Twizy F1 will never win any pink slips in the underground European street racing scene. However, the latest creation from Renault Sport, the motorsport arm of the French automaker, is still worth a look. Renault Sport took its F1 technology and put it into the Twizy, an electric commuter car more suited for driving down the street and back than tearing up the track.

The resulting Renault Twizy F1 has a fiercer look than its commuter-only counterpart and a surprising 0 to 60 time. A kinetic energy recovery system (KERS), similar to the ones used by the F1 teams Renault Sport supplies, helps the Twizy F1 go from 0 to 60 in six seconds, or as quick as the company' fastest production car (top speed is only 68 mph). Other unique additions to the Twizy include a steering wheel from a Formula Renault 3.5 and a rebuilt chassis.
2.6
Score
Popularity
Activity
Freshness
Attend Future Festival