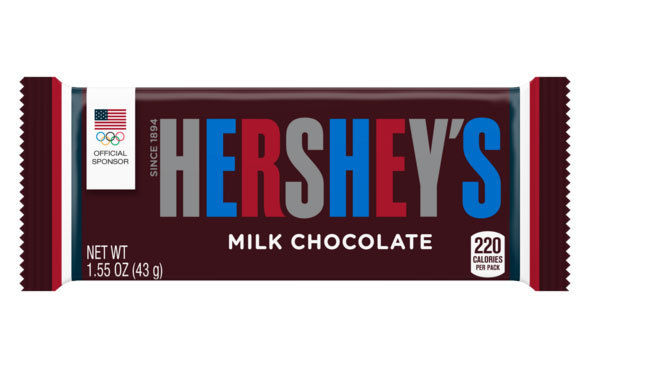 Katherine Pendrill — May 27, 2016 — Marketing
References: hersheysteamusa & businesswire
Share on Facebook Share on Twitter Share on LinkedIn Share on Pinterest
To show its support for Team USA at the 2016 Olympics, Hershey's has replaced its iconic silver font with red, white and blue lettering for the first time in the brand's 122-year history. While the change is fairly subtle, the patriotic makeover helps the brand show its support for the American athletes competing in this year's Olympic games.

As an official sponsor for the US Olympic and Paralympic teams, Hershey's has given some of its most iconic products a star-spangled makeover. Some of the standout products from the new collection include the special-edition Hershey's Kisses Chocolates, which are now wrapped in stars and stripes foil and the Hershey’s Milk Chocolate Bars featuring red, white and blue lettering. All of these products were revealed during a special launch at the Hershey’s Chocolate World Attractions in New York City and the Hershey's Pennsylvania location back in April.

The new Hershey's packaging demonstrates how brand's can tie their American heritage into current event such as the Olympics with patriotic designs.
1.1
Score
Popularity
Activity
Freshness
View Innovation Webinars