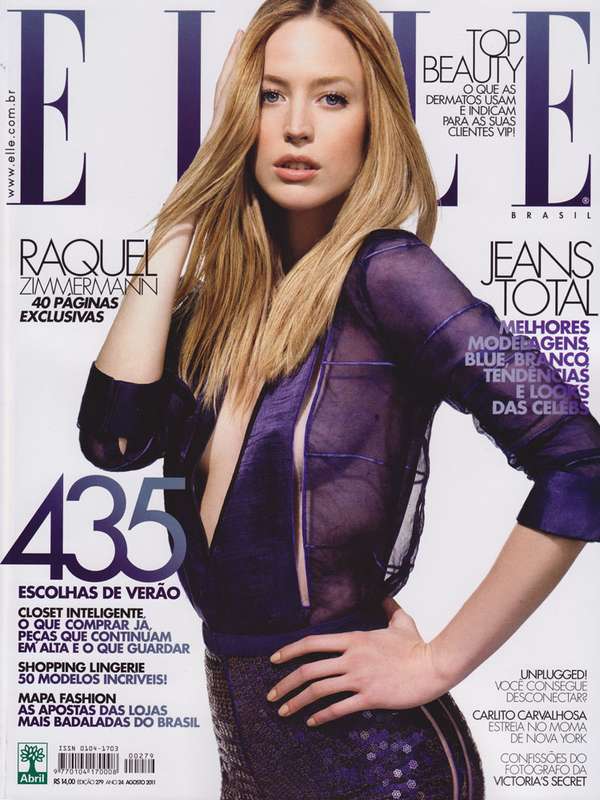 Souzan Michael — August 10, 2011 — Fashion
References: designscene.net & madeinbrazilblog
Share on Facebook Share on Twitter Share on LinkedIn Share on Pinterest
The Raquel Zimmermann Elle Brazil August 2011 shoot will leave you in a purple haze. Styled by Luis Fiod and shot by photographer Henrique Gendre, the Brazilian bombshell shows her homeland some love on the cover of Elle Brazil's August issue.

Donning a sheer purple top and sequined violet bottoms, the supermodel demonstrates how to pull off a single color head-to-toe. Of course, being a gorgeous model doesn't hurt either.

The Brazil native has been all over the fashion world lately, snagging magazine covers like this Raquel Zimmermann Elle Brazil August 2011 shoot, as well as campaigns with some of the biggest names in the industry including Lanvin, Alexander McQueen, Jimmy Choo, and Alexander Wang.

This 40-page editorial spread was shot by photographer Bob Wolfenson and shows Zimmermann modeling some of the season's hottest trends while sporting a retro curled coif.

If this past season in fashion has taught the world anything, it's that Raquel Zimmermann is definitely the "it" model of the moment.
6.3
Score
Popularity
Activity
Freshness
Attend Future Festival Virtual