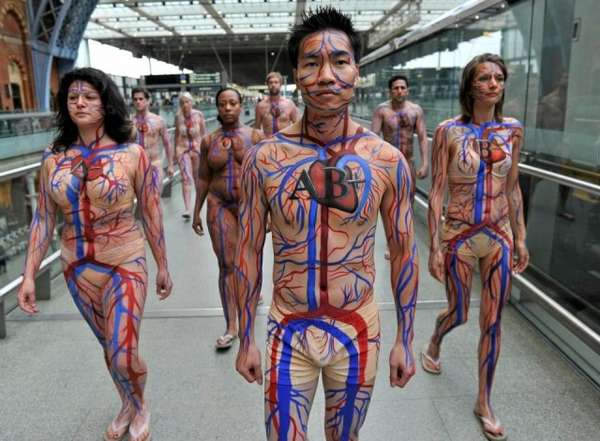 Courtney Scharf — May 10, 2012 — Marketing
References: laughingsquid & streetanatomy
Share on Facebook Share on Twitter Share on LinkedIn Share on Pinterest
In an attempt by the National Health Service to promote blood donation, eight fearless blood donors marched around London with painted-on circulatory systems. The stunt has garnered a lot of attention for its bold approach to a common campaign cause.

The marchers, whose system was illustrated with extreme detail, were almost naked, wearing little more than their underthings. Despite the rainy weather, the volunteers appeared stoic and proud as curious onlookers took photos. Their decorated bodies even featured a prominent heart, listing their specific blood type in the center. The campaign was purposely timed prior to the London Olympic Games, as donations tend to dip during such massively popular events.

A new-age way to promote blood donations, this stunt capitalized on shock value and adopted a viral-friendly approach. By putting the issue of blood donation quite literally at the forefront, the National Health Service has done a bloody brilliant job of breathing life into an exhausted campaign cause.
6.9
Score
Popularity
Activity
Freshness
View Innovation Webinars