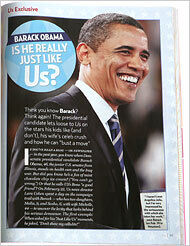 "But not since John F. Kennedy posed for Life magazine during the 1960 campaign â€” tanned and windblown in his sailboat â€” have the entertainment media been so infatuated with a presidential campaign," the New York Times says.

People Magazine is without a doubt one of the most popular weekly gossip magazines out there, covering celebrities, fashion and other entertainment features... but their editorial choice has undergone some major changes as of late.

When the publication first started, they decided politics was a a topic to be strictly avoided. Sticking to that rule has been great until now, seen clearly by the magazines success, but People wasn't afraid to rewrite their rules. They have been focusing on the 2008 presidential campaigns and the personal lives of the candidates, including their wardrobes, relationships, gadgets and other juicy bits of gossip.

US Weekly, a major competitor for People, interviewed Hillary Clinton, they publish essays by Bill Clinton and Michelle Obama and recently did a three-page spread asking, "Barack Obama: Is He Really Just Like Us?"

It helps that a lot of young people think Barack is physically attractive. Just look at how he won over Obama Girl! Here's some of Trend Hunter's coverage: