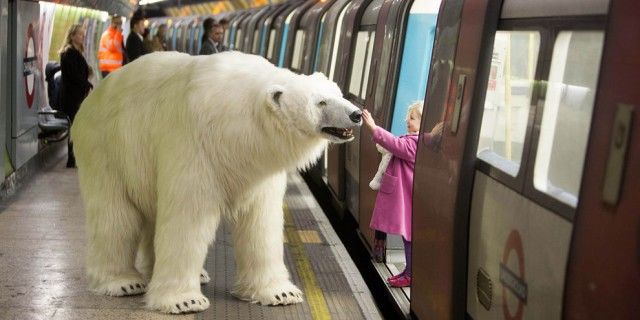 Amelia Roblin — February 5, 2015 — Tech
References: davidparryphotography & imgfeatures
What would you do if you encountered a polar bear on the subway? Traveling through the London Underground, you would undoubtedly be taken aback if the train doors were to open up to a massive furry beast. Fortunately, this gentle creature is an animatronic being, created as a publicity stunt and conjuring up a stir in the transit system to promote a new TV show.

Sky Atlantic & Otilde weren't satisfied with the typical trailer and print campaigns; instead, they wanted to invade the space of a city's occupants in order to stir up intrigue about the mysterious plot of this drama. This polar bear on the subway was the work of 19 Hollywood prop specialists over six weeks, bringing an element of Fortitude's Arctic Circle into an unexpected setting.
6
Score
Popularity
Activity
Freshness