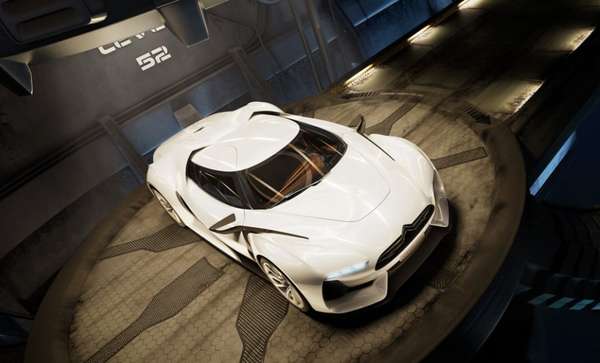 Alexandra Choli — February 24, 2009 — Autos
References: flickr & loqu
Share on Facebook Share on Twitter Share on LinkedIn Share on Pinterest
The rumors are true. This is a car that actually escaped the Alcatraz of driving simulation games and entered boldly in the real world of automobiles. Originally developed by Citroën and game designer firm Polyphony, the slick GTbyCITROËN was one of the performance racecars that rocked the digital planet of Gran Turismo 5 on Playstation 3. Now it is an aggressive show car on its highway to production.

The daunting prototype aims to combine superior aerodynamics and exceptional performance. It boasts a flowing design with dynamic body lines and edgy features, including enlarged air intakes at the front, a flat underside and a mobile spoiler and air diffuser at the rear.

The dark interior presents a stark contrast to the light bodywork, but equally impressive characteristics. The cabin embraces black leather along with elegant touches of copper and steel, clearly exhibiting the car’s sporty mood. An innovative head-up display projects onto the windscreen, directly in the driver’s line of vision, providing cruising information by means of energizing red LEDs. To heighten the driving sensation, as if needed or even possible, the two padded racing seats are granted a lower position, radiating a spirit of competition and an urge for victory.

The sculpted prototype appears as if carved by power and competition, with its virtual past engraved in its essence. And although there is no information regarding the progress towards its production, driving simulations will hardly ever be regarded as implausible imaginations again, but rather as potential realities.
3.2
Score
Popularity
Activity
Freshness
Jeremy Gutsche Keynote Speaker