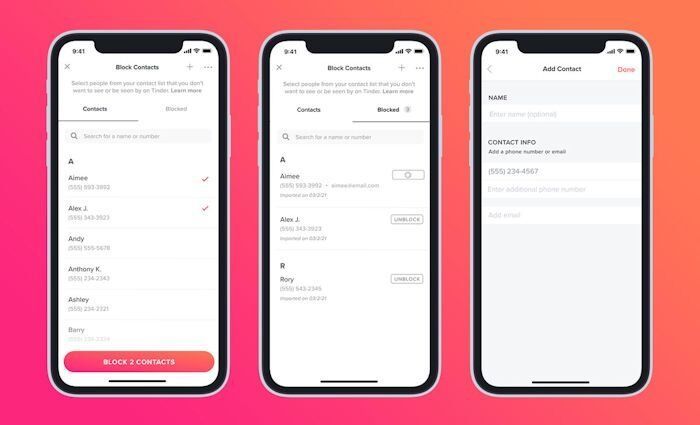 Michael Hemsworth — June 8, 2021 — Lifestyle
References: tinder & geeky-gadgets
Share on Facebook Share on Twitter Share on LinkedIn Share on Pinterest
Dating app Tinder has announced a new phone number blocking feature to help users avoid an awkward or embarrassing interaction with a friend, classmate or colleague. The new feature works by allowing users to easily go through their contact list and select specific people that they would like to avoid from seeing and vice-versa. The feature could also work great for users looking to avoid an ex-lover when swiping for new matches.

The Tinder phone number blocking feature was explained further by the brand which said, "Given the chance, 78% of those surveyed would prefer to not see, or be seen by, these connections on an app. With this in mind, Tinder is rolling out a new feature that allows members to block personal contacts in the app, empowering them to confidently Like their way to sparking new connections while avoiding the awkwardness of a familiar face they would rather not see.”
2.6
Score
Popularity
Activity
Freshness
Access Advisory Services