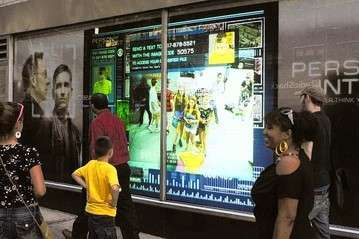 The CBS Person of Interest Interactive Billboards are Borderline Creepy

Susan Keefe — September 14, 2011 — Marketing
References: cbs & online.wsj
Share on Facebook Share on Twitter Share on LinkedIn Share on Pinterest
The popularity of interactive billboards continues to rise as CBS launches an interactive promotion campaign to promote its new drama labeled Person of Interest, set to premiere later this fall. The show has been pegged as the network's next big thing, and with heavy-hitters like J.J. Abrams (Lost) and Jonathan Nolan (Dark Knight) working in the wings, it's not hard to see why. Hoping that the show will be a home run, CBS has pieced together a revolutionary, and slightly creepy, ad campaign.

The Person of Interest interactive billboards are disguised as mirrors that spring to life when approached by a pedestrian. The billboard notifies the observer that they are indeed a person of interest. The person's photo is then taken and displayed on the screen along with a phone number and an identification number. The participant is encouraged to text their identification number to the provided contact info. If they comply, they are then given the opportunity to access a classified file and post their photo to Facebook or Twitter. In addition to these privacy-invading billboards, people who have liked the Person of Interest fan page on Facebook can retrieve a personalized dossier that collects your friends specs, photos and posts from within the website.

This campaign may have information-shy citizens running for the hills, but to the average social-media junky these interactive billboards are the very best kind of advertising.
5.1
Score
Popularity
Activity
Freshness
Get the 2023 Trend Report FREE