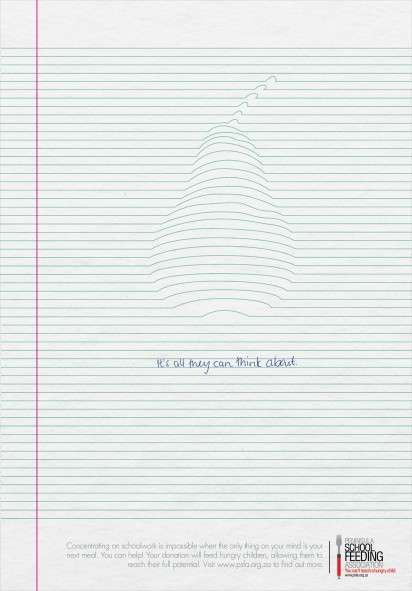 Meghan Young — April 11, 2013 — Lifestyle
References: draftfcb & ibelieveinadv
Share on Facebook Share on Twitter Share on LinkedIn Share on Pinterest
The Peninsula School Feeding Association ad campaign touches upon a pressing problem in school districts: hungry children. It illustrates this issue through the use of a common school staple, a lined piece of paper. Used on a daily basis by young students, it manipulates the lines on the sheets to conjure up a faint image of food from pears to drumsticks. It reads sadly, "It's all they can think about."

Conceived and executed by Draft FCB, an ad agency based in Cape Town, South Africa, the Peninsula School Feeding Association ad campaign was boh art directed and illustrated by Mzi Swartbooi with creative direction by Aaron Harris. It asks for donations to help insure children don't have to think about their next meal, but about the schoolwork they're supposed to be attending to.
3.3
Score
Popularity
Activity
Freshness
Get Trend Hunter Dashboard