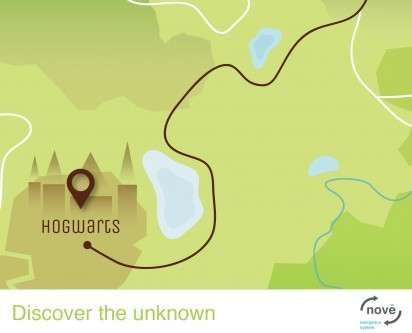 Meghan Young — January 28, 2013 — Tech
References: ibelieveinadv
Share on Facebook Share on Twitter Share on LinkedIn Share on Pinterest
The Nove Navigation System campaign boasts such a sophisticated program, it will be able to take people on fantastical voyages to mythical places such as Hogwarts School of Witchcraft and Wizardry and El Dorado. Appealing to children and adults alike, it is an adventurous ad campaign that plays on imaginations as much as anything else.

Conceived and executed by Cosa Nostra, an ad agency based in Szczecin, Poland, the Nove Navigation System campaign was art directed by Magdalena Kapinos with creative direction by Gracjan Wrząchol. The images as rather modern and simplified considering the places being represented, but they are in line with the aesthetics of the system in general.