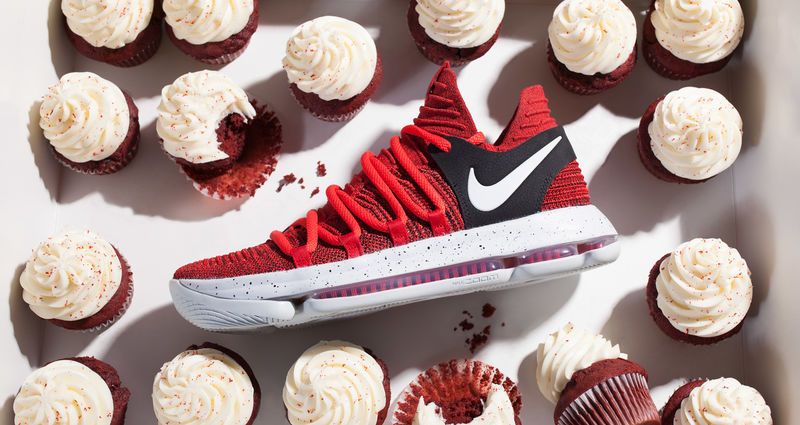 Joey Haar — August 31, 2017 — Lifestyle
References: nike & thescore
Share on Facebook Share on Twitter Share on LinkedIn Share on Pinterest
Many might argue that, motivations aside, Kevin Durant's decision to sign with the Golden State Warriors effectively ruined the competitive landscape of the NBA for at least the next two or three years, but the newest Nike KDX pattern shows that at least the basketball superstar has a sense of humor about it. The new basketball shoes are available in a new pattern inspired by red velvet cupcakes, a reference to a slight fronted against him by a former teammate.

Soon after Durant signed with the Warriors, his suddenly former teammate, now-reigning league MVP, and legendary shade-thrower Russell Westbrook tweeted a picture of cupcakes, which many took as a reference to KD being soft. The red velvet-inspired Nike KDX shoes play off of that insult, owning it now that the KD-led Warriors can safely point to their NBA Finals trophy. Thanks to the savvy move, everyone loves Durant now.
4.3
Score
Popularity
Activity
Freshness
View Innovation Webinars

Basketball-Inspired Exhibitions
This Nike Exhibition is Inspired by Kevin Durant