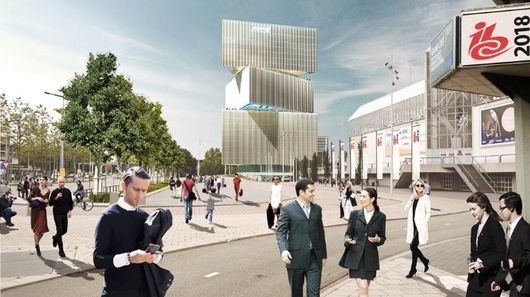 Rahul Kalvapalle — May 8, 2015 — Art & Design
References: amsterdam.nl & gizmag
Share on Facebook Share on Twitter Share on LinkedIn Share on Pinterest
The Nhow Amsterdam RAI hotel isn't just a place for people to stay, but it will function as an attraction itself by virtue of its tremendous, twisted design. Designed by OMA, ths hotel will be situated at the Amsterdam RAI exhibition center.

The building's structure will consist of a trio of separate sections that will appear to be rotated or twisted on a central vertical axis. Despite this unique design, the building will aesthetically fit in with the existing RAI development.

In addition to functioning as a hotel, the Nhow Amsterdam RAI hotel will also be home to a number of other facilities including a television studio, a gallery, a sculpture garden and a spa. The top of the building will feature a restaurant and skybar with spectacular views of the Dutch capital.