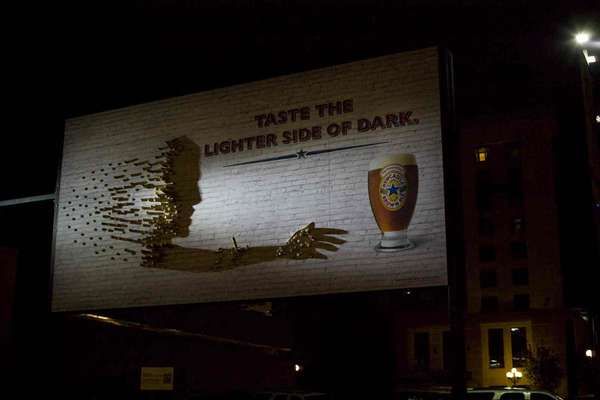 The Newcastle Brown Ale Billboard Shows the "Lighter Side of Dark"

John Hickman — August 10, 2011 — Pop Culture
References: youtube & vitropress.wordpress
Share on Facebook Share on Twitter Share on LinkedIn Share on Pinterest
This Newcastle Brown Ale billboard proves that things aren’t always what they appear to be. By day, the giant ad looks like 3,000 Newcastle Brown Ale bottle caps nailed, stacked and bent into place on a blank canvas. At night, the sun goes down, the light comes on, and the shadows come out -- and that’s when things get interesting.

Using a single source of light beamed across the bottle caps, a human face appears and a shadow art arm begins reaching for a shadow art pint of Newcastle Brown Ale. Newcastle isn’t what it appears to be either. A dark ale, it’s surprisingly smooth, which is why its tag line is, “Taste the Lighter Side of Dark.”

The 256 square foot Newcastle Brown Ale billboard was installed in San Diego’s night life district, the Gaslamp Quarter. Concept, design and branding for this project was by San Diego-based Vitro. Shadow art was created by Pablo Power and Ellis Gallagher of Brooklyn, NY.

Implications - This is an innovative use of art, design, creativity and technology to create an engaging brand experience. Anyone can build an ordinary billboard, but this project demonstrates how creative thinking brands can make the experience extraordinary and drive buzz, brand awareness, and interaction.
5.2
Score
Popularity
Activity
Freshness
Attend Future Festival