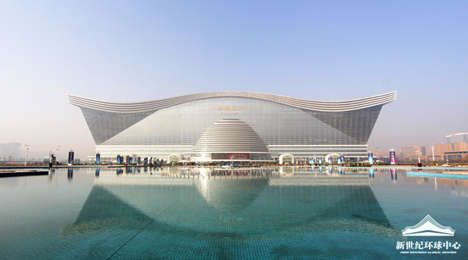 Laura McQuarrie — July 16, 2013 — World
References: globalnews & dezeen
Share on Facebook Share on Twitter Share on LinkedIn Share on Pinterest
The New Century Global Centre in Chengdu, China recently opened its doors earlier this month for the first time, making it the world's largest building. The massive structure is capable of holding 20 Sydney Opera Houses and is complete with its own artificial sun.

The world's largest man-made building is a huge 18-storey structure that holds ice rinks, office space, museums, conference halls, beaches and hotels. Although this building is located in the booming metropolis of Chengu, it seems that this building is almost a city in itself.

The building is over 1,300' in length and width and towers nearly 330' over Chengdu. The massive glass and steel structure was built over a new metro station which will certainly make it an easy-to-get-to and unmissable destination for a wide range of visitors.
2.6
Score
Popularity
Activity
Freshness
View Innovation Webinars