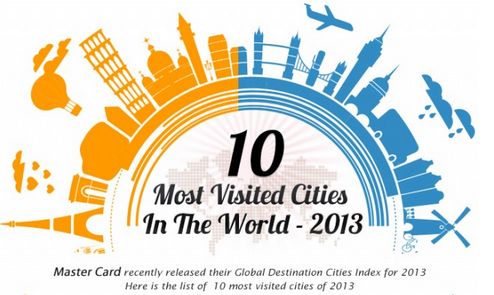 Master Card Reveals 2013's Most Visited Cities in the World

Laura McQuarrie — November 3, 2013 — World
References: visual.ly & dailyinfographic
The Global Destination Cities Index by Master Card was recently released, detailing the most visited cities in the world for 2013. The top ten cities includes some names of major destinations like Paris, London and New York, as well as some other cities that might surprise you.

The graphic breaks each travel destination down by number or annual visitors, popular attractions and cheap hotels that travellers could stay at. One of the most inexpensive places to stay is the 'Hotel Chinatown 2' in Kuala Lumpur, which offers rooms for just $16/night.

According to Master Card, the number one most visited city for 2013 was Bangkok, Thailand, with an astounding number of over 15.98 million visitors per year.
5.7
Score
Popularity
Activity
Freshness