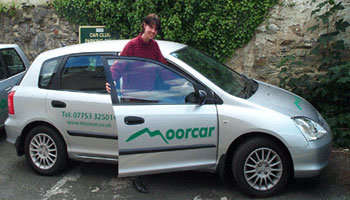 Tiana Reid — January 17, 2013 — Social Good
References: moorcar & facebook
Share on Facebook Share on Twitter Share on LinkedIn Share on Pinterest
Based in Chudliegh, South Devon, England, Moorcar is a car rental service offered to members only. It's a social enterprise that lets you start your own car club in various communities. The goal is that to make sharing vehicles an easy process thereby reducing emissions all around.

Moorcar was founded over 11 years ago and now hosts various community hubs in the United Kingdom including South Brent, Fintry Stirlingshire, Bridge of Weir and Isle of Bute. Cars can be booked online at various time intervals and also on a daily rate. You can also sign up for a membership on the social enterprise's website but you will need to show your physical driver's license to a co-ordinator near you.