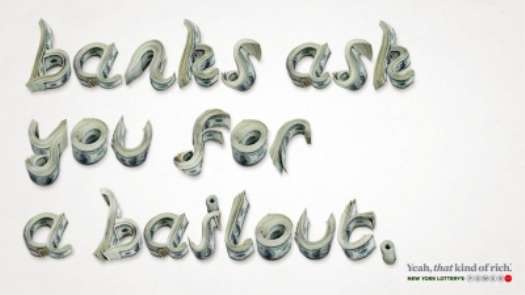 Katherinev123 — August 21, 2012 — Marketing
References: ddb & psfk
Share on Facebook Share on Twitter Share on LinkedIn Share on Pinterest
DDB New York has created a unique 'money typeface' to go with New York Lottery's campaign 'Yeah, that kind of rich.' The typeface is actually made out of stacks of real dollar bills, and the team at DDB spent two months painstakingly bending and pinning the bills together to create letters that would look like a special font when photographed from above.

The money typeface was used to create new ads, to be put up on buses, bus shelters and metro stations across NYC, for New York Lottery. They feature statements such as "You shop, the market rises" and "Banks ask you for a bailout." According to PSFK, each advertisement required about $1,000 to $1,500 worth of money to make. The video here shows in more detail how DDB New York created its money typeface.
3.4
Score
Popularity
Activity
Freshness
Attend Future Festival