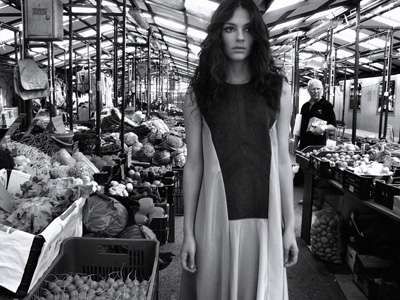 The Momento Mori Editorial by Michal Greg Alludes to Death

Katherinev123 — August 9, 2011 — Fashion
References: michalgreg & designscene.net
Share on Facebook Share on Twitter Share on LinkedIn Share on Pinterest
Titled Momento Mori, this photo shoot by Polish photographer Michal Greg delivers captivating, albiet creepy, scenes of a woman seemingly lost in the chaos of everyday life. The model, Monika M, appears in the photos looking blank and displaced—almost as if she were a ghost—amidst the hustle and bustle of day-to-day environments like a supermarket, a playground and a kitchen.

This all goes hand in hand with the title of the editorial. The phrase “momento mori” actually refers to a genre of art that aims to remind people of their own mortality. Thus, the title of this shoot is a dead giveaway (no pun intended) that death will be a prominent theme in the editorial.