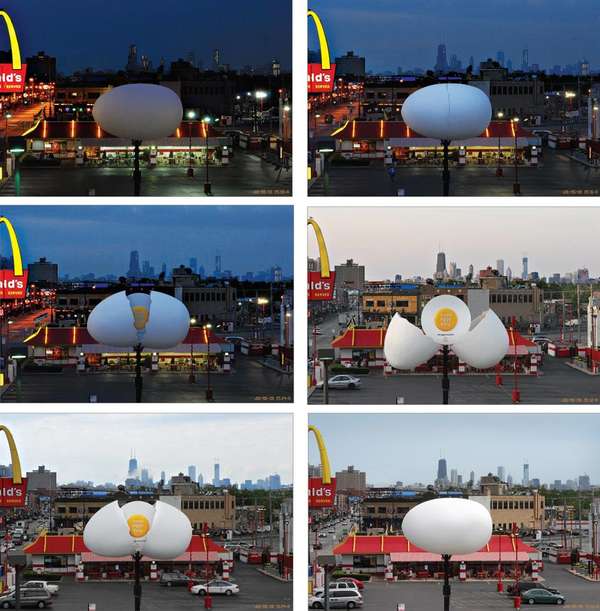 Ayman — July 12, 2008 — Lifestyle
References: creativity-online & arabaquarius.blogspot
Following their awesome Fresh Salads billboard that was made out of real lettuce, McDonald’s continue to roll out unique outdoor ads like a giant egg that hatches each day.

Created by Leo Burnett, Chicago (the same agency that did the lettuce billboard), the Giant Egg was installed across from Wrigley field in Chicago last week.

As you can see in the image (click for a close up), the egg starts ‘hatching’ in the early morning hours. By breakfast’s time, the billboard is fully hatched, displaying ‘Fresh Eggs Daily’ on the egg’s yolk. The egg stays open between 6:00AM and 10:30AM, indicating the availability of fresh eggs for breakfast during that interval. Later, the egg starts closing up again and returns to its ‘whole’ state. The next day, the same cycle is performed and the egg billboard starts hatching again.

I absolutely love it and can’t wait to see what else McDonald’s and Leo Burnett would come up with.

Check out a super gallery of 25 awesome McD ads (including the above-mentioned lettuce billboard and an ad that can only be read at night) and a collection of other cool outdoor billboards.
5.9
Score
Popularity
Activity
Freshness