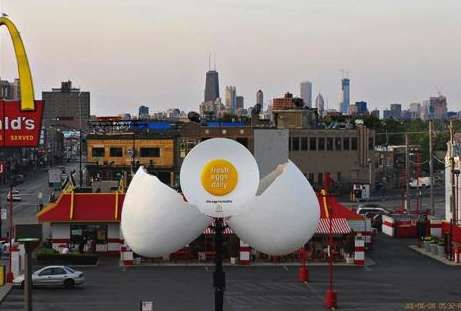 The McDonald's Fresh Eggs Daily Billboard is a Top-Notch Stunt

Meghan Young — November 14, 2011 — Marketing
References: leoburnett & mymodernmet
Share on Facebook Share on Twitter Share on LinkedIn Share on Pinterest
After the egg stunt Lady Gaga pulled during her 2011 Grammy performance earlier this year, many people probably believed that another egg stunt could never outdo that one, yet this McDonald's Fresh Eggs Daily billboard may just have achieved the impossible. Hot on the heels of the outstanding sundial billboard, this most recent campaign focuses on breakfast, not all the meals throughout the day.

Also conceived and executed by ad agency Leo Burnett, with the help of Prop Art Studio who handled the mechanical engineering, the McDonald's Fresh Eggs Daily billboard is actually works pretty simply despite being an incredibly clever concept. Throughout the wee hours of the morning, it begins to crack slowly until about 6 am, at which time breakfast is usually in full swing. It begins to close again around 10:30 am until the next morning.
5.5
Score
Popularity
Activity
Freshness
Jeremy Gutsche Keynote Speaker