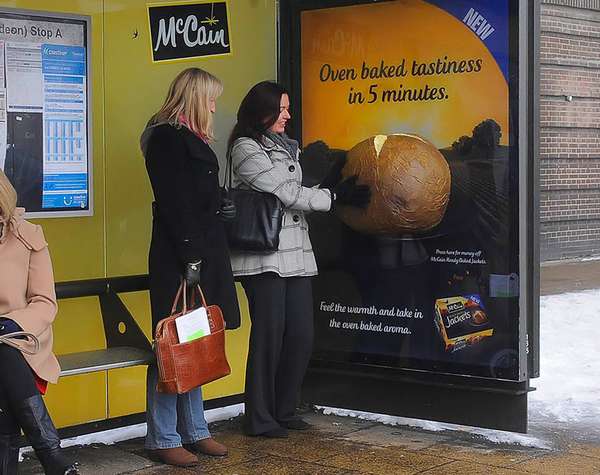 Katherinev123 — February 10, 2012 — Marketing
References: jcdecaux & designboom
Share on Facebook Share on Twitter Share on LinkedIn Share on Pinterest
The McCain Ready Baked Jackets campaign is enticing consumers through smell and touch. This innovative multisensory campaign, developed by McCain Foods UK with JCDecaux, Hyperspace at Posterscope and creative firm BMB, includes a bus stop billboard that releases the smell of baking food along with a 3D fiberglass jacket potato sculpture that's hot to the touch. Consumers just have to touch a button that will make the potato both heat up and simultaneously emit the smell of baked potatoes.

A £1.4 million marketing effort, the McCain Ready Baked Jackets campaign aims to promote the brand's oven-ready baked potatoes (which are ready in five minutes) and demonstrate how delicious they are. It took the company and scent specialists three months to develop an accurate smell of McCain jacket potatoes for the billboard.

The billboard is set to appear at 10 bus stops across the UK, says JCDecaux, and it will also dispense coupons for the product to promote customer trials.

Music-Making Mics
Mogees Turns Any Surface Into a Musical Instrument