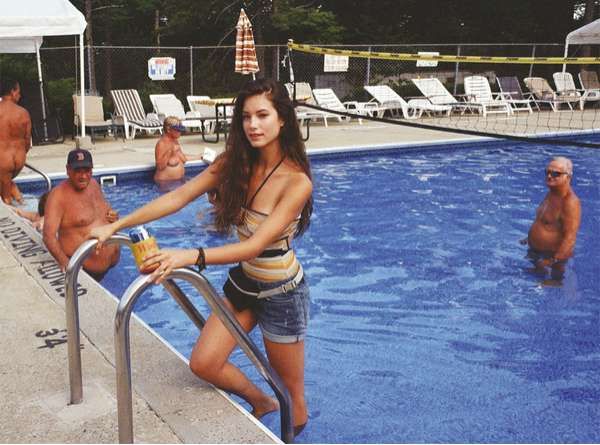 Corinne Guirgis — August 31, 2011 — Naughty
References: viceland & thephotographylink
Share on Facebook Share on Twitter Share on LinkedIn Share on Pinterest
If you had any doubts about the liberating nature of the nudist lifestyle, this Matthew Frost August 2011 Vice Editorial will reassure you! The spread features model Lauren Young playfully seducing readers with more than just her eyes. A fun and intriguing twist on the traditional barely-there shoot, Young is also featured alongside a senior-citizen counterpart whose naked self is not quite as alluring.

Moving from the swimming pool to the golf course and the tennis court, the editorial captures all of the freedom of summer both inside and outside the bedroom. Though stylist Annette Lamothe-Ramos didn't have much to work with, her edgy selections from American Apparel and Nixon contribute to the boundary-less nature of the shoot, which was shot at the Sunridge Nudist Resort.

Implications - The new wave of fashion shoots has emerged from the new generation's appreciation for diversity and individuality in style. The rise of edgy and avant-guarde publications like Vice, Frost and Love has coincided with this shift in fashion ideals.
5.6
Score
Popularity
Activity
Freshness
View Innovation Webinars