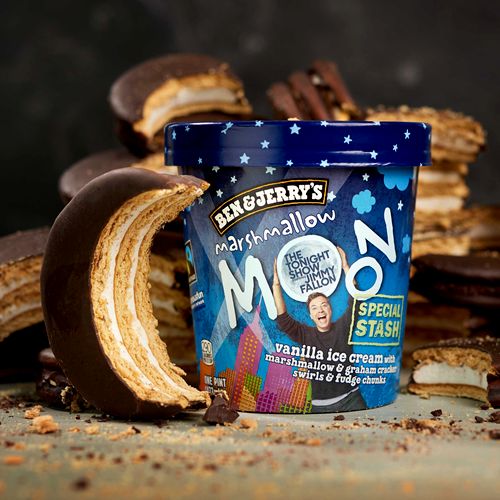 Michael Hemsworth — November 7, 2017 — Lifestyle
References: benjerry & delish
Marshmallow Moon is the latest flavor creation from Ben & Jerry's. The flavor is part of the brand's new Special Stash line that is made in micro-batches and it comes as the second ice cream that has been branded with The Tonight Show starring Jimmy Fallon. The flavor itself features a vanilla base that has been mixed with marshmallow, graham cracker, swirls, and fidget chunks.

Ben & Jerry's new Marshmallow Moon ice cream has been created in extremely limited quantities, which makes it unavailable for purchase in grocery stores. While the ice cream is only available via the brand's website and in the Ben & Jerry's scoop shops, it was unveiled on The Tonight Show where it was given to audience members to try.
4.5
Score
Popularity
Activity
Freshness