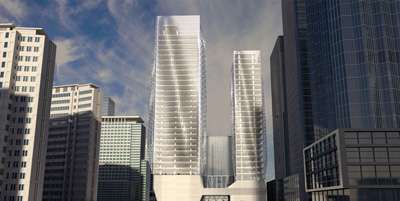 Two Towers by MA2 Architecture Complement the Skyline of Shenzhen

MA2 architecture's sleek twin towers are elegant and refined; they avoid over-the-top design that would make them eyesores amid the rest of the city's architecture. As the designer states, the Two Towers complement the surrounding area rather than competing with the designs of their neighboring buildings.

The towers meet at ground level, at a point that is "constructed by a layered composite of tectonics that function as a base and matrix in which the towers project upward," says MA2 architecture. Because of this base of aerodynamic plates, the towers feature a lobby entrance and podium that deliver a "fluid interplay of architectural surfaces." The designer has put emphasis on the ground level of the towers, as this is the part of the building that receives the most interaction from the public.
3.6
Score
Popularity
Activity
Freshness
Get Trend Hunter Dashboard