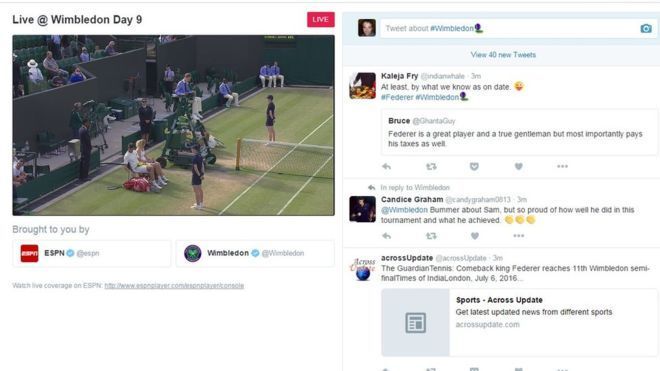 Twitter is Live Streaming Sports With its First-Ever Wimbeldon Coverage

While watching Wimbeldon on Twitter, viewers can also see tweets related to the tournament on the same screen. When a user comments on the feed the hashtag #Wimbeldon is automatically added to it. The feed is streamed from Wimbeldon's own Twitter account and can also be accessed on a separate page dedicated to the real-time stream. The company has stated the "live-stream is an extremely early and incomplete test experience, and we'll be making lots of improvements before we launch it in its final form."

Twitter has also signed a deal earlier this year to live stream NFL games. Considering how quickly major events (i.e. Superbowl, the Oscars, Grammys or NBA Finals) tend to trend on Twitter in real time, the ability to live stream the events will give users and viewers a more integrated and interactive experience, which will likely increase traffic to the site.
1.2
Score
Popularity
Activity
Freshness
Get the 2021 Trend Report FREE