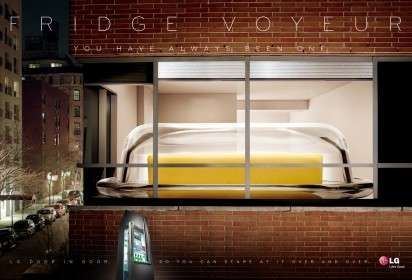 Meghan Young — February 1, 2012 — Marketing
References: yr & ibelieveinadv
Share on Facebook Share on Twitter Share on LinkedIn Share on Pinterest
Not everyone is a Peeping Tom, but the LG Fridge Voyeur campaign shows that many people do harbor some peeper tendencies, especially when it comes to food. This ad campaign turns refrigerator occupants into alluring morsels of desire, from which people will find challenging to avert their eyes.

Conceived and executed by Y&R, an ad agency based in Sao Paolo, Brazil, the LG Fridge Voyeur campaign promotes the company's door in door refrigerator. It essentially boasts a see-through door that allows people to peep in whenever they want. Calling its potential consumers "Fridge voyeurs," the ad campaign scoffs at the idea of denial, stating in its tag line, "You have always been one."