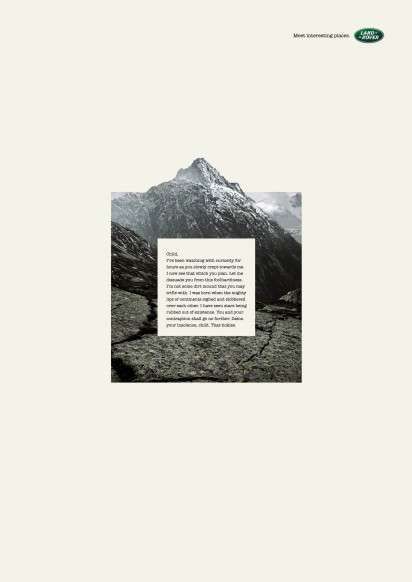 Meghan Young — March 1, 2012 — Autos
References: yr & ibelieveinadv
Share on Facebook Share on Twitter Share on LinkedIn Share on Pinterest
Auto ads often focus on the viewpoints of the driver or the car, but hardly ever do they take the perspective of the land that the vehicles tread over; that is, until the Land Rover Meet Interesting Places campaign came about. It is intriguing to learn that landscapes are as literate, or even more so, than human beings. This clever ad campaign gives mountain ranges, streams and forests a voice, and by doing so, an extremely intellectual personality.

The Land Rover Meet Interesting Places ad campaign was conceived and executed by Young & Rubicam, an ad agency based in Dubai, United Arab Emirates. A set of minimalist posters, the images are given a geometric treatment. The monologues were creatively written by Shahir Zag and Kalpesh Patankar.
1.7
Score
Popularity
Activity
Freshness
Jeremy Gutsche Keynote Speaker