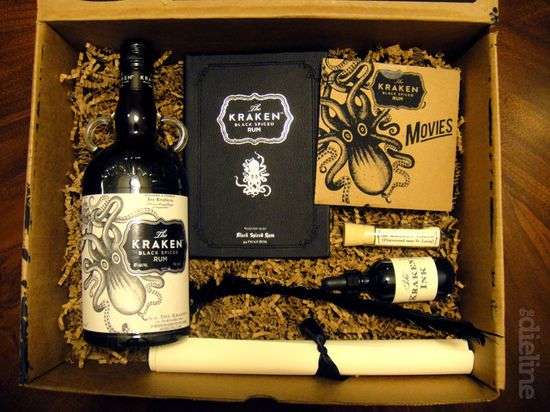 Mallory Whitfield — November 22, 2009 — Lifestyle
References: krakenrum & thedieline
Share on Facebook Share on Twitter Share on LinkedIn Share on Pinterest
The cephalopod trend of octopi and squids donning just about everything from t-shirts and handbags to jewelry has now spread to liquor. Of course… Sailors are famous for their love of dark spiced rum and for their run-ins with legendary creatures of the deep, so why not combine the two? That’s what the makers of Kraken Rum have done, but they’ve taken it one step further with a sleekly designed website and packaging.

Kraken Rum is inspired by the legendary kraken, or giant octopus, which supposedly dragged many unfortunate sailors to their watery graves. On their website Kraken Rum features a book and video about this mythical beast and notes

The largest shipment of Caribbean black spiced rum was said to be brought down by the Kraken. The rum was named thusly, as to being as dark, strong and mysterious as the ink of this beast.