Top 100 Gadget Trends in November
Next
Set of
Related
Ideas 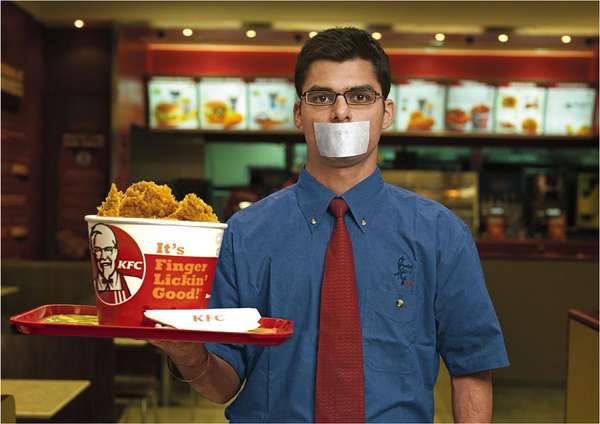 Bianca — August 12, 2008 — Lifestyle
References: adsoftheworld
Share on Facebook Share on Twitter Share on LinkedIn Share on Pinterest
Check out these KFC ads. At first, you probably think of the AIDS “Speak no Evil” campaign which featured celebrities with their mouths taped. This could be interpreted as the KFC staff not being able to speak of the real horrors that take place in the chain. The fact that the employees look frightened further fuels the chance of misinterpretation.

This three part series of Kentucky Fried Chicken ads can easily be misinterpreted, not a good quality for a company constantly under public scrutiny for ethical reasons.

They were created by Ogilvy & Mather, Gurgaon, India and feature KFC employees with their mouths taped. This could be interpreted in so many ways.

KFC’s intention is probably to imply that they really don’t need to say a thing: “Finger Lickin’ Good” is clearly written on the bucket of deep-fried chicken. Their food is just so darn tasty, they have to prevent their employees from having a taste by securing their mouths with heavy duty tape.

Fast food chains have a lot of beef to put up with, but KFC has to take one of the worst public beatings thanks to groups like PETA.

Since KFC in a constant battle to retain a positive public image, having clever marketing tactics is critical to their survival. Ads like this can be really dangerous PR.
5.5
Score
Popularity
Activity
Freshness
Access Advisory Services