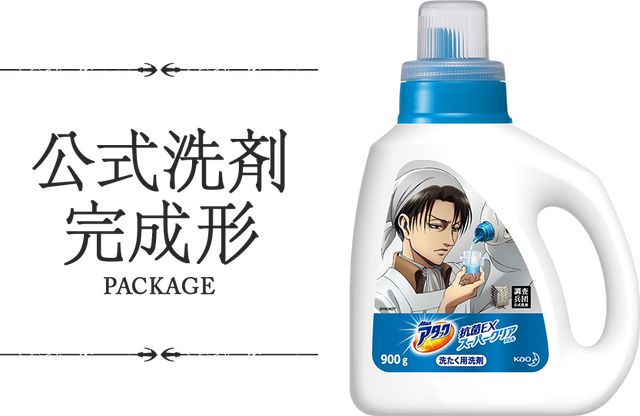 Laura McQuarrie — December 18, 2018 — Marketing
References: yogoso & soranews24
Share on Facebook Share on Twitter Share on LinkedIn Share on Pinterest
Kao laundry detergent, a Japanese brand, teamed up with Attack on Titan to create a limited-edition Kao Attack on Titan Laundry Detergent. The anime-inspired detergent bottle has been made available to consumers online through Amazon, as well as various drugstores throughout Japan. Prominently featured on the branded detergent bottle is Captain Levi, one of the main protagonists in Attack on Titan, who also happens to be well-known as a neat freak.

To create the collaborative detergent bottle, Kao interacted with fans on Twitter to have them determine their preferred packaging design, slogan and wooden bucket design by a vote. Soon, the wooden bucket accessory will be available to shop. The Kao Attack on Titan Laundry Detergent.is advertised with a slogan that says: “laundry with no regrets.”

Upon release, the limited-edition detergent was so popular among fans, it sold out of stock.
3.7
Score
Popularity
Activity
Freshness
View Innovation Webinars