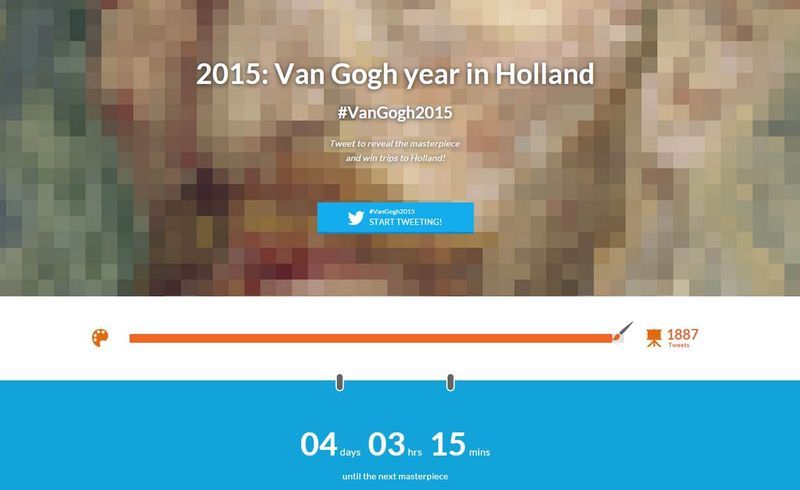 This Digital Campaign for the Netherlands is from Expedia

Rebecca Byers — March 5, 2015 — World
References: vangogh2015.expedia & clickz
Share on Facebook Share on Twitter Share on LinkedIn Share on Pinterest
Expedia and the Netherlands Board of Tourism and Conventions have collaborated on a clever marketing campaign and sweepstakes that makes efficient use of social media, in particular Twitter's new Flock to Unlock feature. The Expedia Twitter accounts in Britain, France and Germany will be featuring one Van Gogh masterpiece every week for six weeks that will only be revealed when enough Twitter users tweet using #VanGogh2015. Complementing each of the paintings will be the prize of a trip to the Netherlands, naturally.

The innovative digital campaign seeks to highlight tourism gems across the Netherlands as the country celebrates the 125th anniversary of Vincent van Gogh's death. Van Gogh, aside from being a Dutch cultural institution, has always been an important financial asset for the nation, with the Van Gogh Museum in Amsterdam being the country's third most visited museum.

The digital tourism campaign is a clever way to capitalize on a traveler's interest in sharing their experiences online, while also expanding their digital reach through the use of cutting edge social media tools.
4.2
Score
Popularity
Activity
Freshness
Access Advisory Services