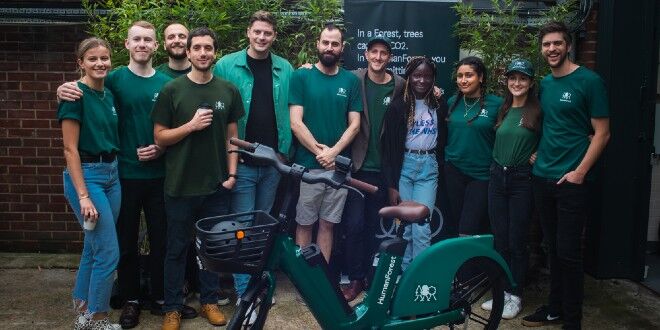 Humanforest Has Launched a Fleet of 800 E-Bikes in London

Niko Pajkovic — September 20, 2021 — Eco
References: humanforest & bikebiz
Share on Facebook Share on Twitter Share on LinkedIn Share on Pinterest
HumanForest, an electric bike manufacturer with an eco-friendly mission statement, has officially launched a new fleet of e-bikes in London, England. The launch will introduce 800 brand-new electric-powered bikes throughout the city in an effort to encourage commuters to opt for sustainable travel alternatives.

As part of the launch, HumanForest gathered a range of community groups, customers, government officials, and partners to deliver a live event dedicated to educating the city of London on the benefits of cycling for both mental health and the environment. The event was even joined by Dr Alex George, the Prime Minister’s Mental Health Ambassador, and Destiny Boka Bates, co-founder of air pollution campaign Choked Up.

As part of the initiative HumanForest will be allowing customers 10 minutes of free ride time everyday. “Every single person gets ten minutes free riding, every day – providing Londoners with a means to create a cleaner, greener and more sustainable city for all," said HumanForest CEO, Agustin Guilisasti.