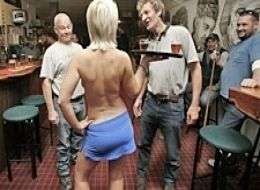 Rose A. Valenta — February 25, 2009 — Naughty
References: bostonherald
Residents of Vassalboro, Maine, tried to stifle the idea of a topless coffee shop in their neighborhood, but town officials said “the coffee shop met the letter of the law.”

The Grand View Topless Coffee Shop opened last Monday with signs for patrons that read “Over 18 only, no cameras, no touching, cash only.”

Servers are making great tips bearing breasts, while delivering the mocha latte and cappuccino to men, women, and couples visiting the shoppe.

You can read an in-depth Counter-Point interview between two Connecticut journalists, Laurence Cohen and Gina Barreca, who toss around ideas about sexist stereotypes and the Grand View topless cafe at The Courant.

The Grand View Topless Coffee Shop is an equal opportunity employer and hires both men and women as servers.