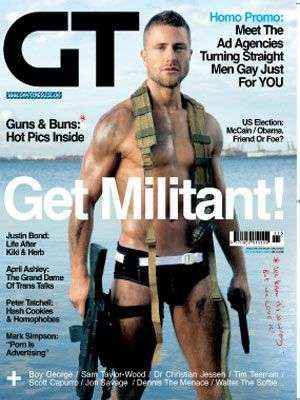 mediterranean — November 12, 2008 — Naughty
References: gaytimes & adrants
Share on Facebook Share on Twitter Share on LinkedIn Share on Pinterest
Popular British gay magazine, Gay Times, recently recruited advertising students and agencies on what AdRants likes to call, “an ambitious project.” The aim of the “Homo Promo” campaign was to produce advertising material to promote gay lifestyle to straight men as a cheeky response to the constant silly accusations by conservatives and Evangelicals that gay people seek to corrupt and recruit unsuspecting heterosexuals.

Regardless of the motivation, the magazine received some brilliantly funny and cheeky submissions like the third image by James and Joe from Leeds, UK. The extremely cheeky ad shows a guy making a “female organ” shape with his mouth along the copy, “Anything she can do...”

Another submission shows trainwreck female celebrities, such as Amy Winehouse, with the tagline, “Go Gay.”

Check out the gallery for more submissions, which sadly lack the quality and imagination of the James and Joe work, and the cover of the Gay Times November issue with a mention of the Homo Promo.
6
Score
Popularity
Activity
Freshness
View Innovation Webinars