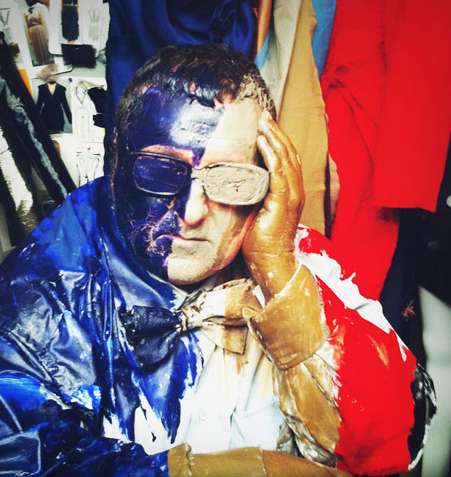 Katherinev123 — February 5, 2012 — Fashion
References: harpersbazaar & styleite
Share on Facebook Share on Twitter Share on LinkedIn Share on Pinterest
Paint, photography and fashion royalty all come together for this eye-catching Harper's Bazaar 'Lost in Fashion' editorial for the magazine's March 2012 issue. Chinese photographer and artist Liu Bolin, who is known for making himself "disappear" into his works, has created a photo series representing how some of today's top designers will lose themselves in their creations and work.

The designers included in the Harper's Bazaar 'Lost in Fashion' are Angela Missoni, Alber Elbaz, Jean Paul Gaultier and Valentino's Maria Grazia Chiuri and Pierpaolo Piccioli. Bolin has covered each of them in paint so that they fade into the background of the designs they have created. As Alber Elbaz says of his own tendency to lose himself in his designs, ""As a designer, I'm not an exhibitionist; I'm more of a voyeur. All I try to do is be invisible."