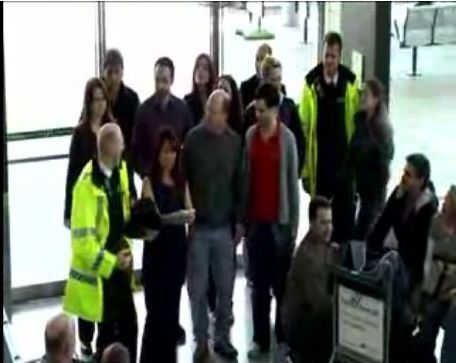 lourdes sanchez bayas — May 17, 2008 — Marketing
References: lunaticadesnuda.blogspot
Share on Facebook Share on Twitter Share on LinkedIn Share on Pinterest
This is a guerrilla ad by a group of actors who surprised and shocked people waiting at Stansted Airport in London with an impromptu musical performance, a la Improv Everywhere. It's always fun to see people's reactions when they see actors pop out of nowhere singing and some even tap dancing.

There were 14 actors and seven hidden cameras involved in this guerrilla ad to promote the website lastminute.com, which is a London-based online travel site that also books theater tickets. A well-placed sign can be spotted at the end of the clever commercial asking the question, "When was the last time you went to the theatre"?

Check out the similar stunt done by Improv Everywhere: